2.  In ידך the guf curves till a point on right [A] equal to the finish of kotz RT on the left, then the regel protrudes on a further slant inward [B]. Please notice this point, it will help in the continuation - we might imagine that the begining of the regel is starting descending from the guf finishing at A as a triangle, but in truth the regel is the extra piece B turning back inward.
Try to imagine this yud finishing at A [without B], it would have a strong kotz pointing downward to resemble the regel - but would it be the regel? No! It would be the guf only, in a perfect one-piece moonshape.

The additional pictures from here on, are all from very cheap csavim, I will not relate to any problems in them - only to the specific issue at hand: Yud - proper division, between rosh and regel. 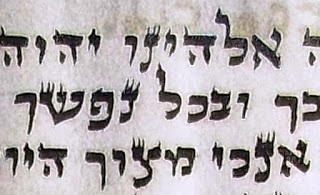 3.  In this picture the yud of hashem is messed up (the yud of elokeinu is also in a very bad shape) - look carefuly, the body piece is somewhat a triangle, from it extends a tiny regel keeping it kosher, the kotzim top & RT are added as a straight line - try to visualize the yud without that line how it would look!
The word אנכי - the yud is worse, from the bottom (the tip of its regel) all-the-way up is actualy 1 piece only - a triangle, the additional kotz on its face causes an illusion as if there is a division between the guf and the regel, but in truth there isn't. Still since to the regular vision it looks like a yud, I am willing to fix it, but would be very afraid to say its kosher as it is right now.

4.  This yud has a division of guf and regel, but the porportions are totaly distorted. Again forget the kotz on its face that causes much illusion, the guf is on a slant, till the regel descends straight down. The upper part - the guf is much less in hight than the regel, aprox. 1/3. Because of the slant and the kotz, an illusion appears causing one to see the rosh more-or-less equal to the regel.
This yud is very problamatic [in truth it is a tiny vav], but may be fixed by adding ink to the bottom of the rosh, filling in between the kotz RT and the regel on the right, or even widening the rosh downwards more [if needed], and afterwards adding a new kotz RT.

5.  This yud is kosher, although the regel fills in more than half of the bottom of the rosh, still the rosh is distinct to itself. But if the regel would be just a bit more wide, or on a tiny slant towards left, it would swallow the rosh (the rosh would become batel).

6.  This yud is exactly like the yud of hashem in picture 3, the guf comes down on a sharp slant, the final change in slant which allows the regel to be independant, saves the yud.

7.  This yud is pasul (although may be fixed) no doubt!
It is basicaly only 2 pieces, the thick kotz on the left, and the regel on the right - the body is swallowed up in-between! 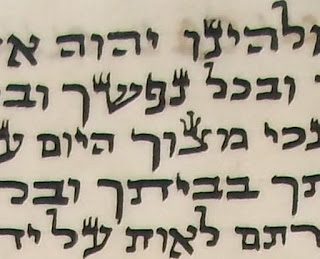 8.  The yud of hashem is close somewhat to pic. 7, but look carefuly you see in the middle has a guf - its kosher.
The yud of היום seems to my observation like pic. 7.
The yud of בביתך is kosher, the kotz is thin allowing a recognition of its guf - in difference to היום that the thick kotz swallows up the recognition of the guf.

10.   The second yud of כימי is exactly like pic. 5.
The yud of השמים is kosher, there is a definit break between rosh and the regel.. 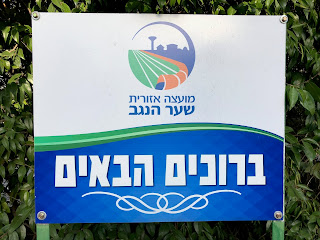